As I started this walk today I tried to wrap my head around how I was going to walk for 6 to 8 hours in the rain. It happened and I made it in about 6 1/2. One step, one stone, one puddle, one foot in front of the other. 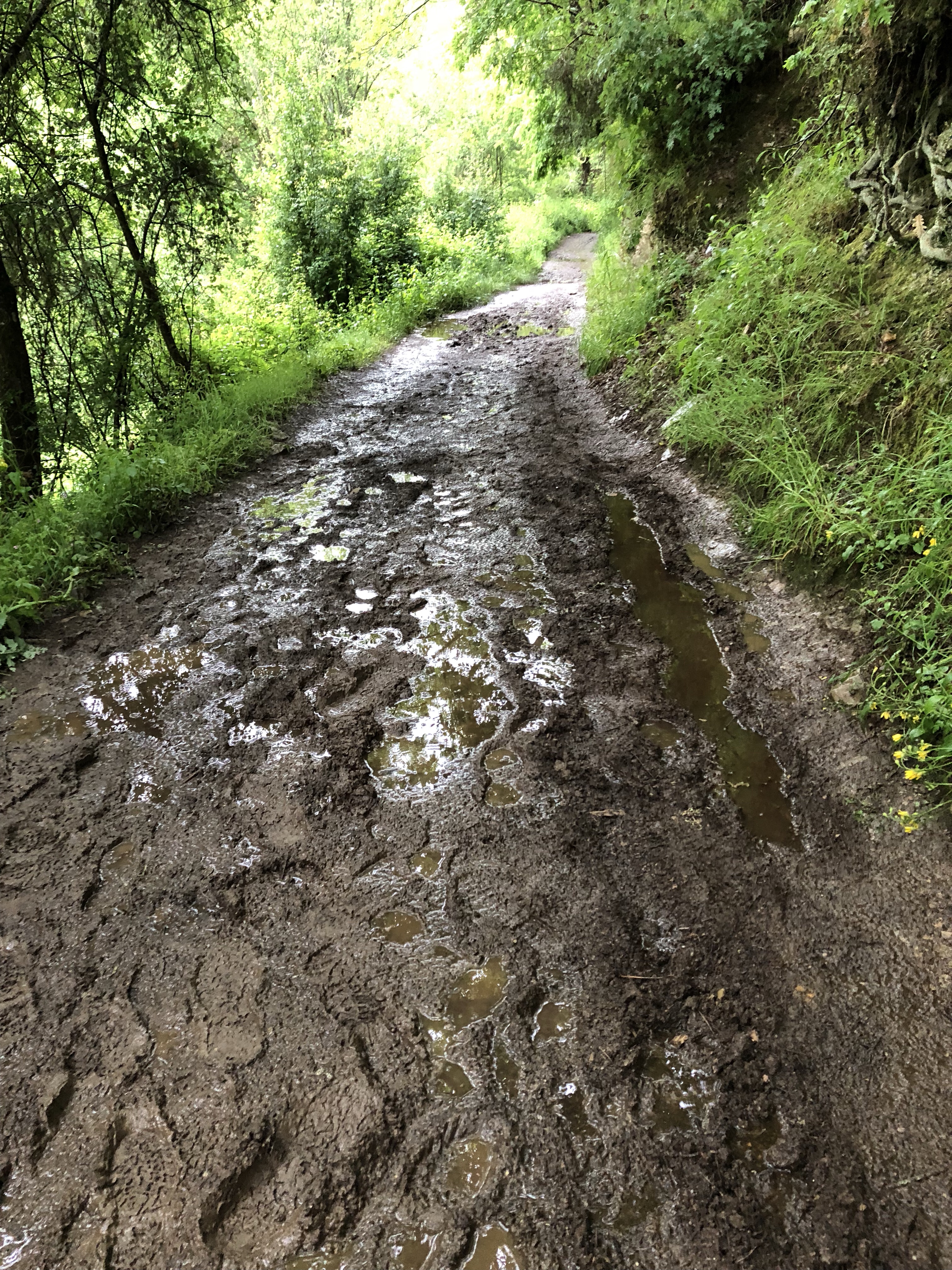 I am now in Galicia, the eastern-most region of Spain, where the mountains take a direct hit from the winds coming across the Atlantic. Rain is the norm here and I am in the thick of it. 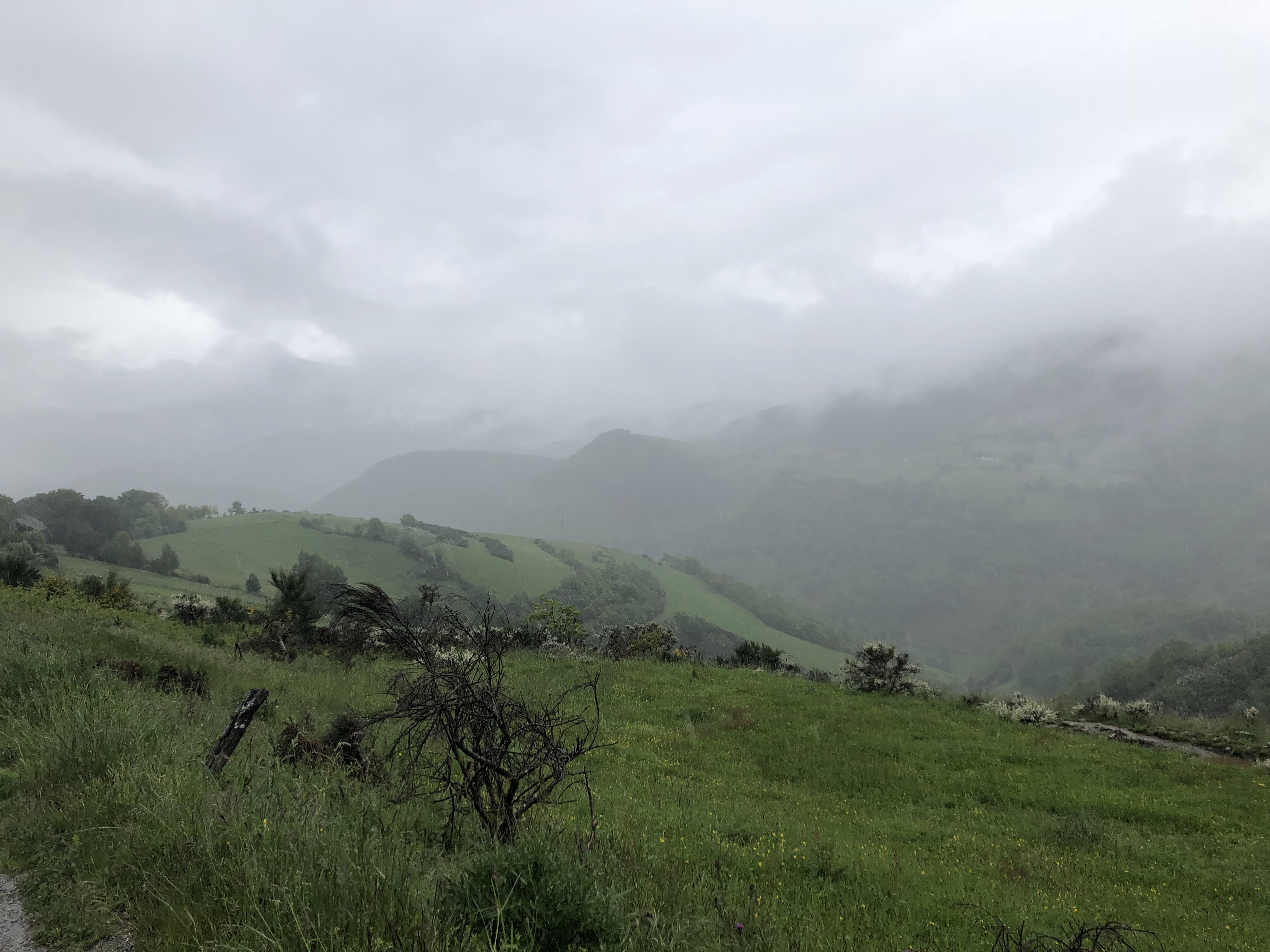 There are three kinds of stops on the Camino: the first is where you just sit down on a wall or lean against a post and rest your back briefly. Those usually last only one or two minutes.The second type is where you get coffee or make a bathroom stop. You take your pack off and relax for maybe 10 minutes. The third kind of stop could last 30 minutes or so. It involves taking off your pack and boots to allow your feet to relax and usually eating something. In the first two hours this morning, I think I made a type 1 stop every 10 minutes. The focus required to keep myself upright, without my trusty walking sticks was intense.

I had a few funny stops ( types 1 and 3, respectively) today involving handsome, athletic men. First there was a pack of about 20 Portuguese bikers. They had taken the rough trail, rather than the road and were yelling and pushing their bikes up the rocks. They had a chase vehicle somewhere with all their gear and thought I was crazy to be carrying mine. They offered to have their truck take my pack to the next town, but I declined. I said I would carry it the whole way, and I will.placeholder://

When I arrived at the top, in O’Cebreiro, I went into a place to get out of the downpour and have some lunch. I walked in the door and a bunch of guys wearing Turin Triathlon shirts started shouting at me in Italian and pointing at their plates. I said, okay, I’ll have what they’re having. I sat down with them to eat my tuna empanada (not bad), but found that food was our only common language. Lots of smiles and thumbs up.

The other good thing that happened in that tiny town was that I got new walking sticks. I went into a shop advertising honey and cheese and found the guy was selling not only high end walking sticks, but also 20 different kinds of trail shoes. True entrepreneurs always find the sweet spot.

I was walking down the main “thoroughfare” of a another village when, lo and behold, a cow parade appeared. They were being called in for milking (by name, I think), but took the time for really good eye contact with me.http://trishdeford.com/wp-content/uploads/2018/06/img_1572-2.mov

I had dinner, noodle soup and “fish” with no other descriptive detail. When I asked (in Spanish) what type of fish, I got a shrug. Oh well. Protein of any kind is good on this trek. My table mates were Dan and Karsten from Germany. She had been on the trail for 20 days and was doing great. He had joined her 3 days ago and already had a knee injury. He’s an IT guy and complained that sitting at a computer is not good training for the Camino. He was glad to have the option of shipping his pack ahead each day. They talked about their travels together and made me jealous of Europeans. For a $100 they can fly to dozens of countries, places like the Azores and Majorca. I think it’s that much in tolls for us to drive to New York.

Tomorrow’s forecast is 100% chance of rain. Not the tiniest doubt about it.