This morning, after an hour’s walk, I arrived in Sarria. 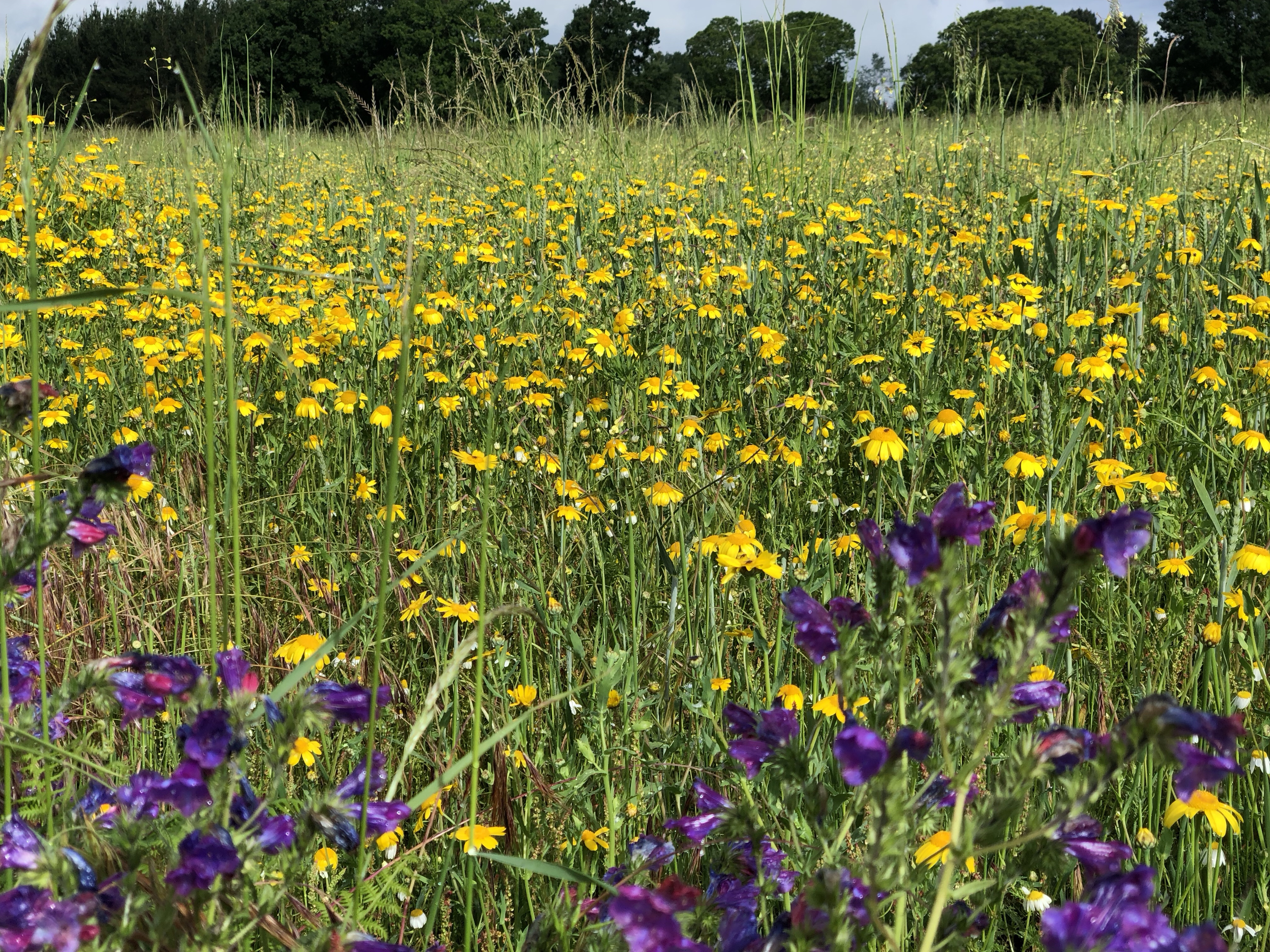 That town is known as the starting point for the largest number of pilgrims. The reason for that is, in order to get a “Compostela”, the official certificate from the Catholic Church for completion of the Camino, you must walk a minimum of 100 kilometers. That is the distance from Sarria to Santiago. I have heard that Spaniards like to state that they have a Compostela on their resume, proof that they can complete arduous tasks. (100k =62 miles, come on?) For that and many other reasons, many people seem to have hopped on at Sarria.

As I walked through the town, I saw large groups of people, with small packs, being lectured by their leaders. I ran across some of those groups on the trail, including a group of American students who had paid for an escorted package trip. I’m sure they’ll have fun, but seriously doubt any spiritual benefit. But, as they say, everyone does their own Camino. The downside for me is a crowded trail. 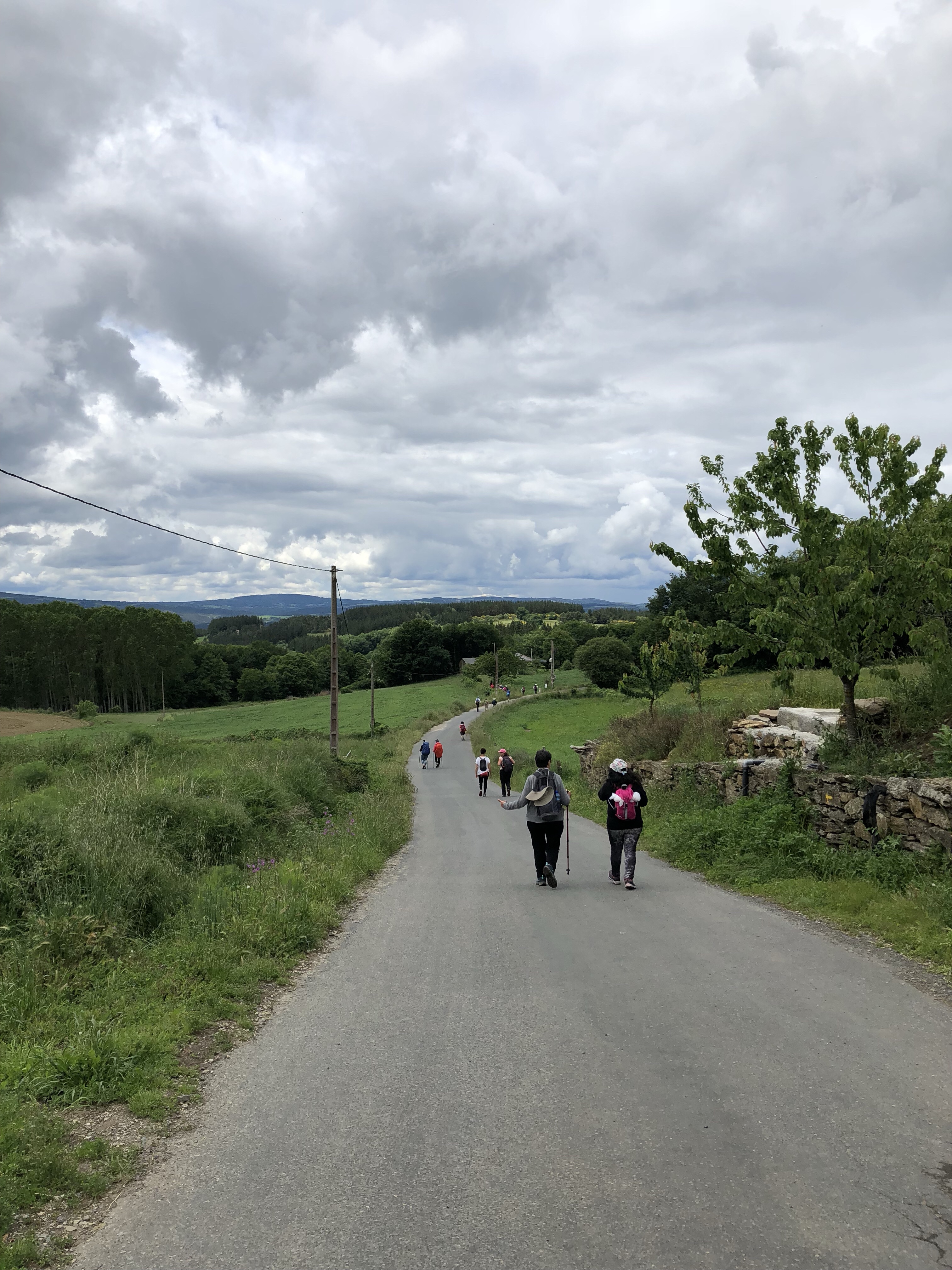 I walked in rain and sun today. When your shoes and socks are soaked through by 10:30 am, what can you do? I say, follow that great Korean tradition of eating while walking in the rain. A Snickers bar (the official trail food of the Appalachian Trail) cheered me right up.

The sun came out and I had a lovely afternoon. I saw lots of dogs that reminded me of our old pooch, Neal. German Shepard variants seem to be the favorite here. One LITTLE lady was out walking her dogs and I asked to take a picture. She was thrilled, though the dog didn’t seem happy to pose. 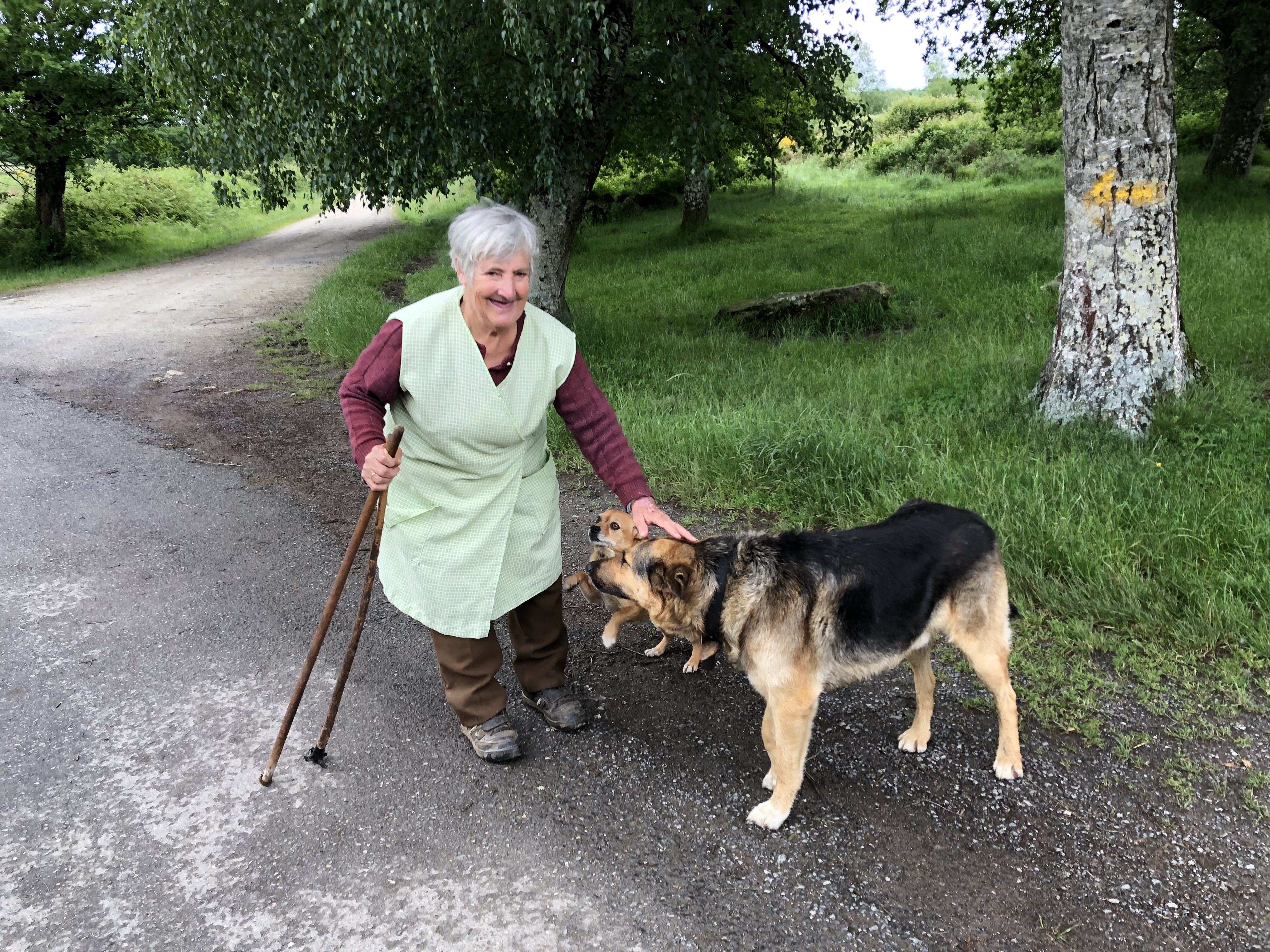 Others were camera ready. 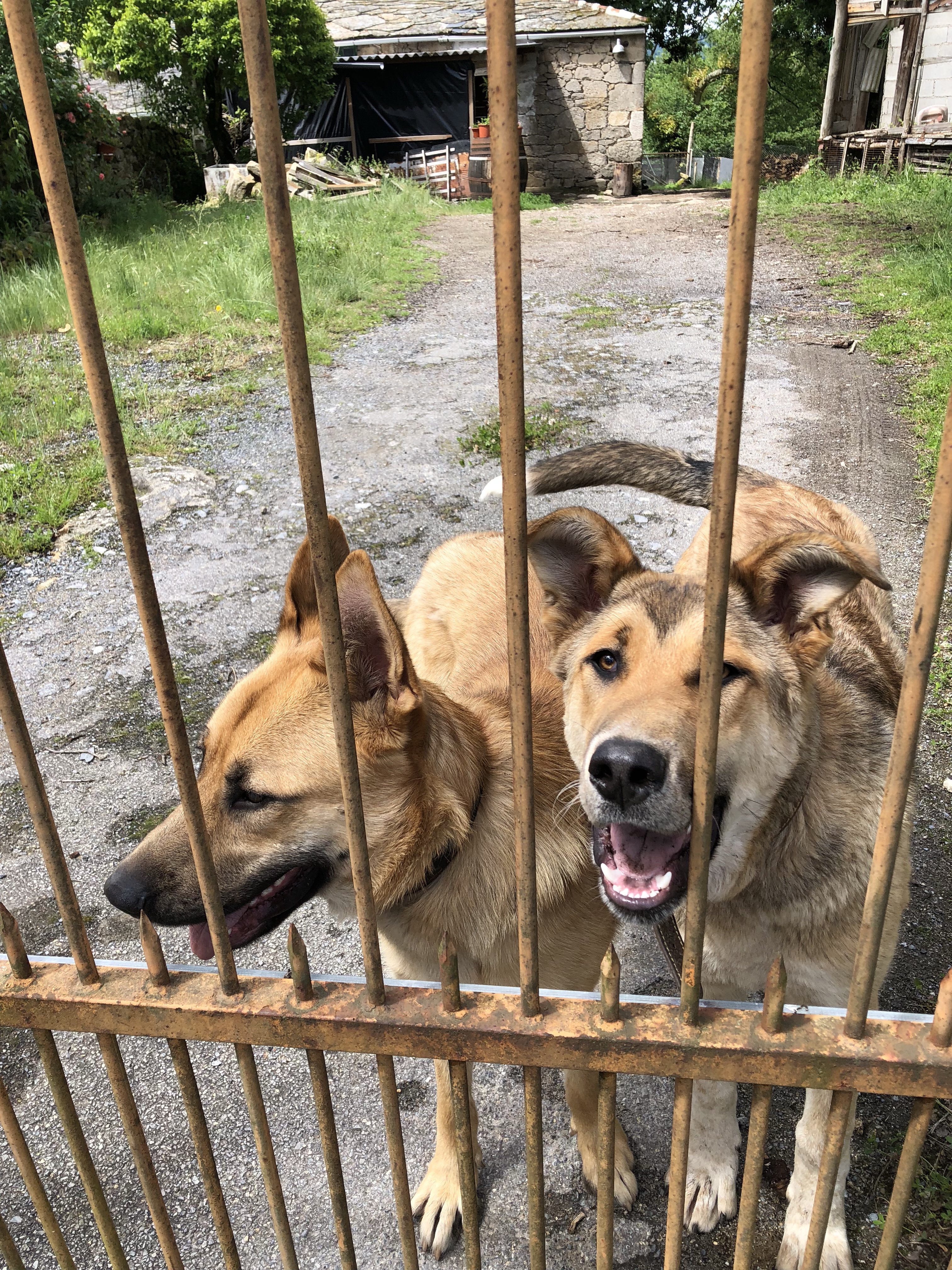 The best experience of the day happened unexpectedly. I had run across several “donativo” stands, offering cookies, yogurt and fruit during the day. They were lovely and, had I been hungry at the moment, I would have stopped. Late in the afternoon, I saw another one, with a sign offering free food, free drinks and free WC. That caught my attention. As I slowed to look in, a man came out, took my elbow and guided me in. He immediately put a full sized plate in my hand. I said no, no, baño! And off I went. When I emerged, he had found two new candidates, American sisters from North Dakota and Colorado. He gave them plates and filled them, without asking, with various homemade specialties. I had never seen anything like this on the trail. His buffet table was covered with rolled crepes, slices of empañada, ham, cheese with quince paste and many other things. 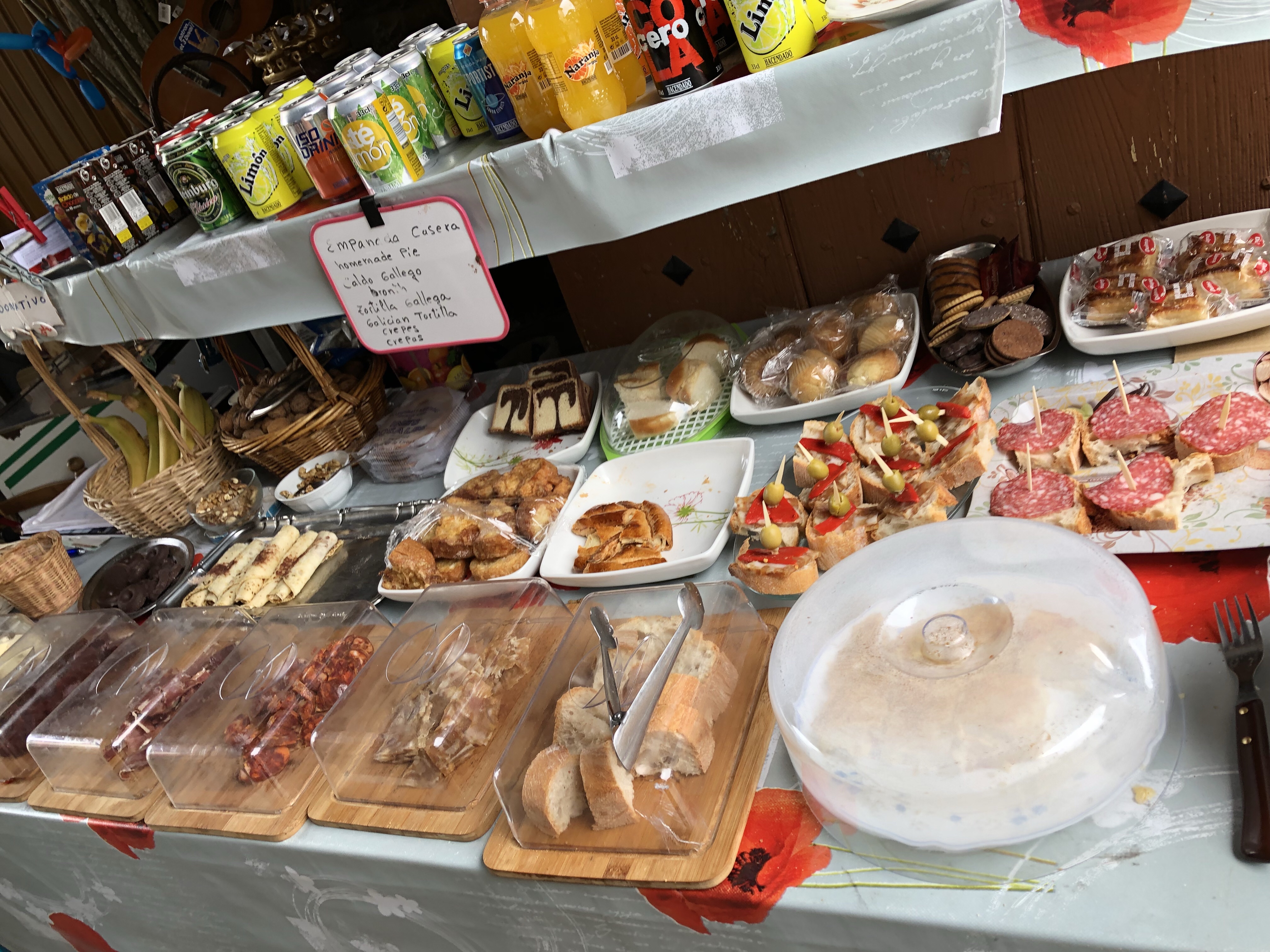 The sisters were seated and he was pouring them water, as if they were dining at the finest restaurant. Meanwhile, his wife was yelling from the kitchen and he went to retrieve another freshly made treat for the table. I have no idea what calls these people to serve pilgrims in this way. Perhaps they turn a profit from the donations. In any case, it makes everyone very happy. 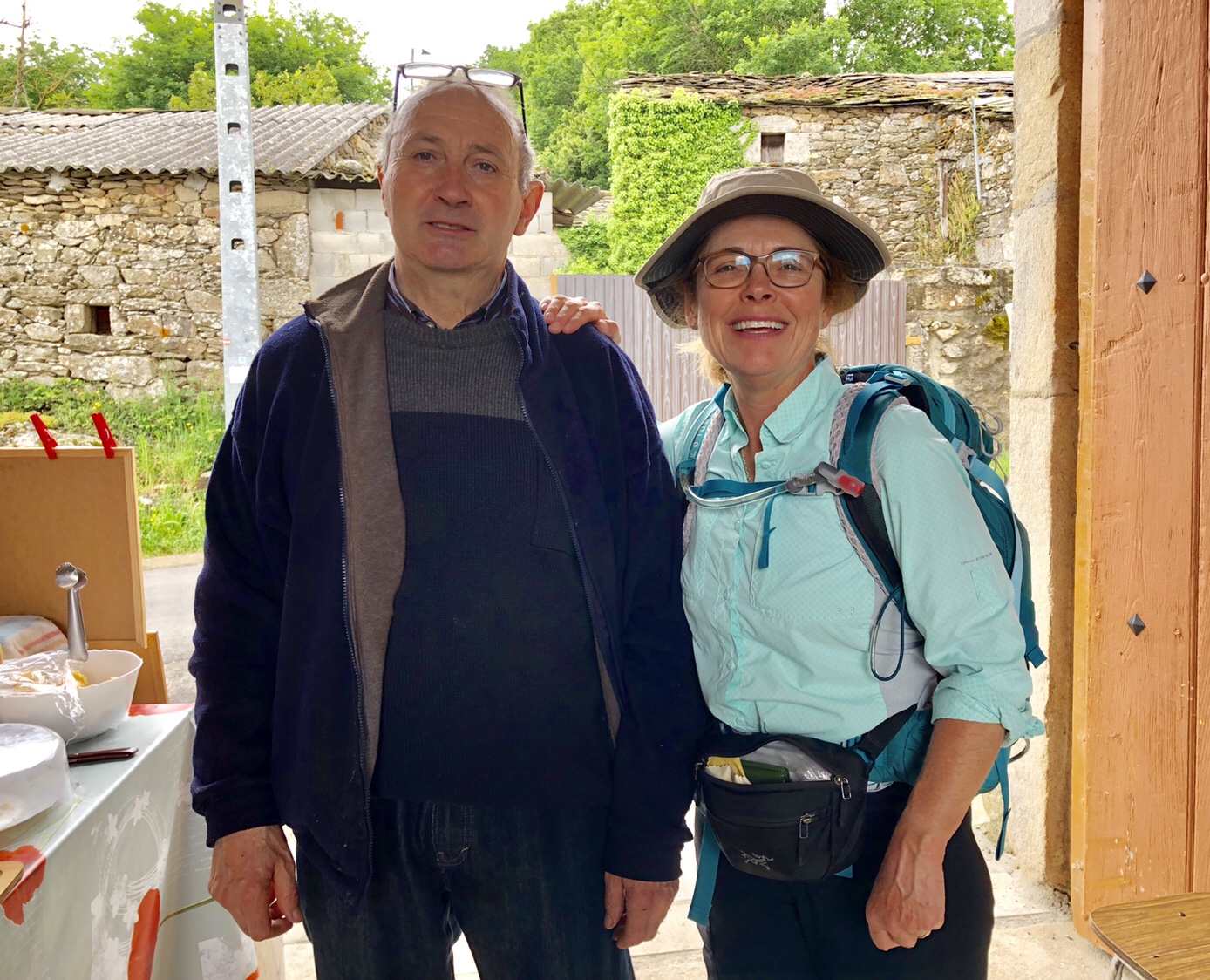 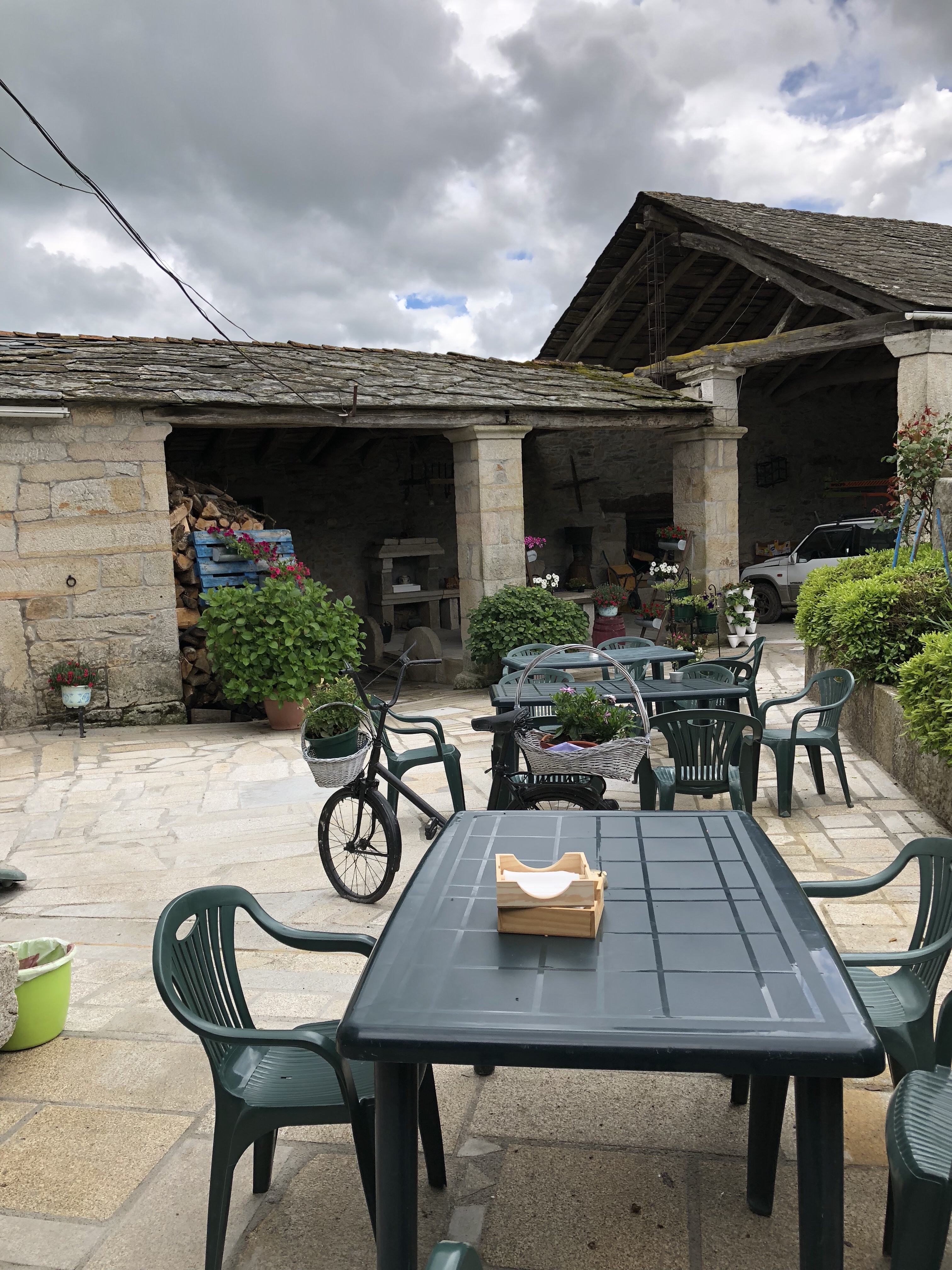 I arrived VERY tired in Portomarin at 4:30, after starting at 8:00. I dallied a bit with stops, but it was still a long day. And, I was tired when I began the day. I just don’t sleep well without sheets.

I had pulpo (octopus) for dinner and am off for an appointment with my sheets tonight. Buenos noches. 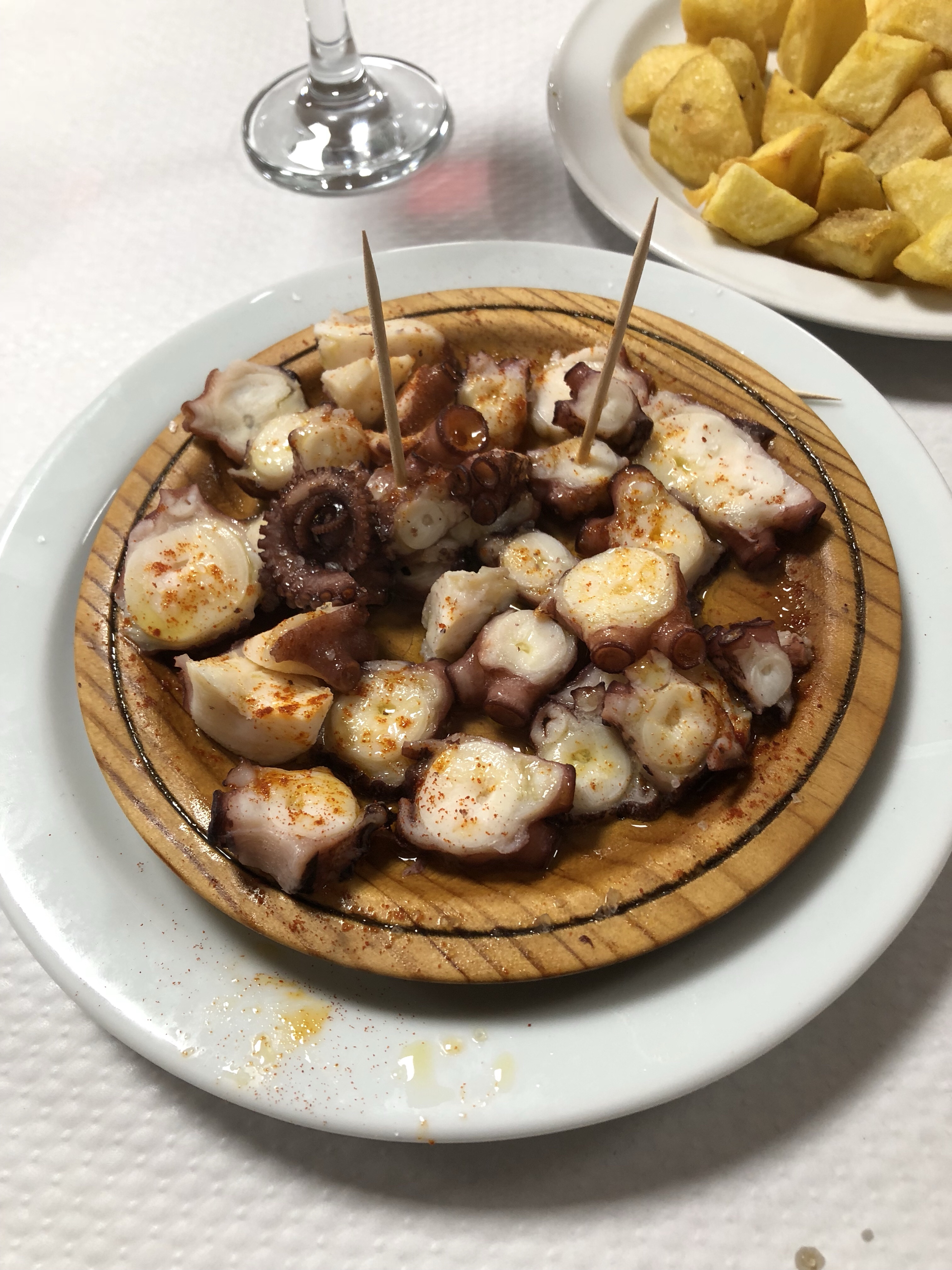