Puddle of the Day: 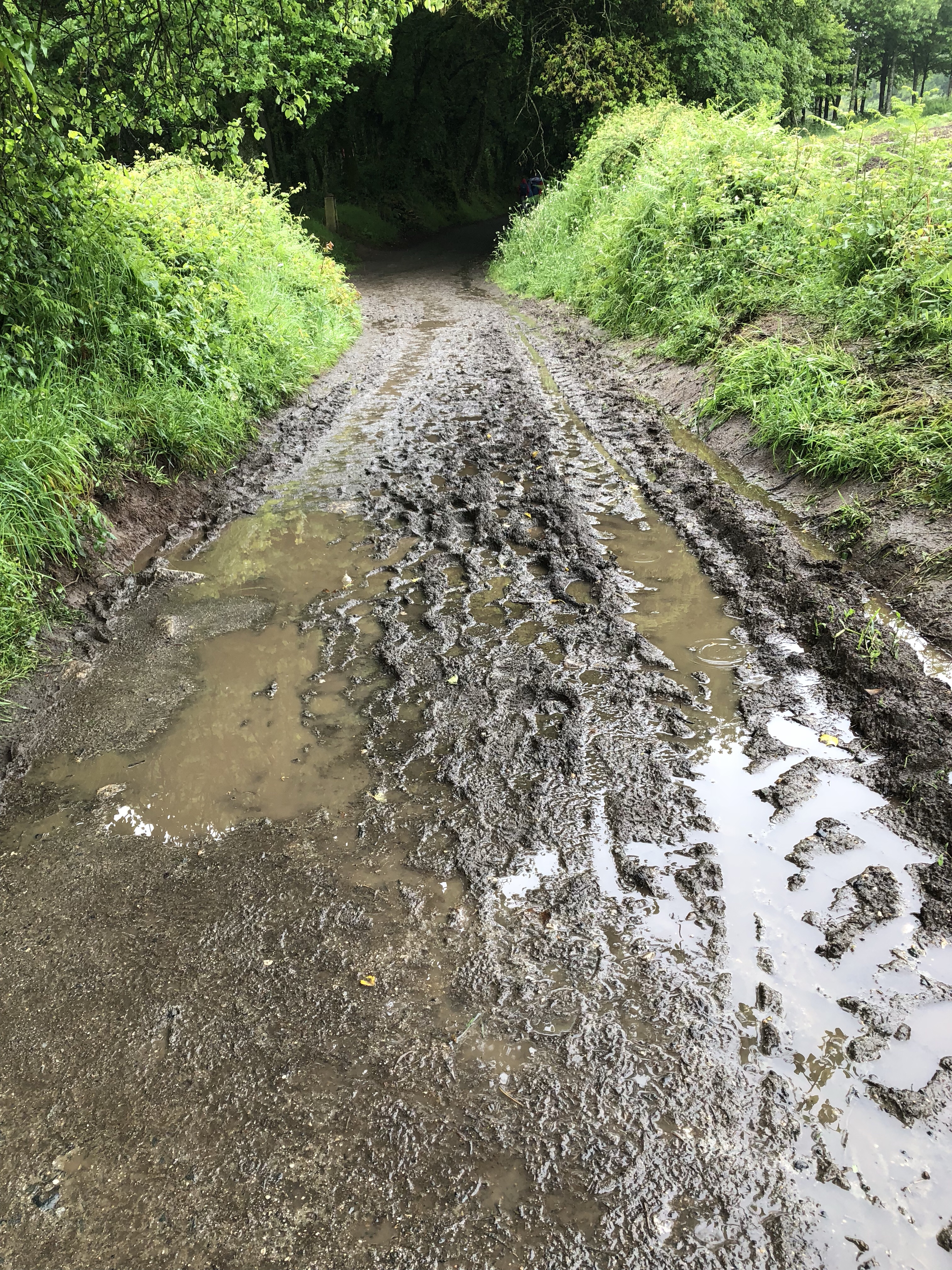 That’s enough about the weather.

Before leaving Portomarin, I stopped by the church. The whole town was moved from the valley floor in the 1960s, prior to the construction of a dam. The church was taken apart block by block, numbered, and reassembled in a higher location. The numbers (not too subtle) are still visible. 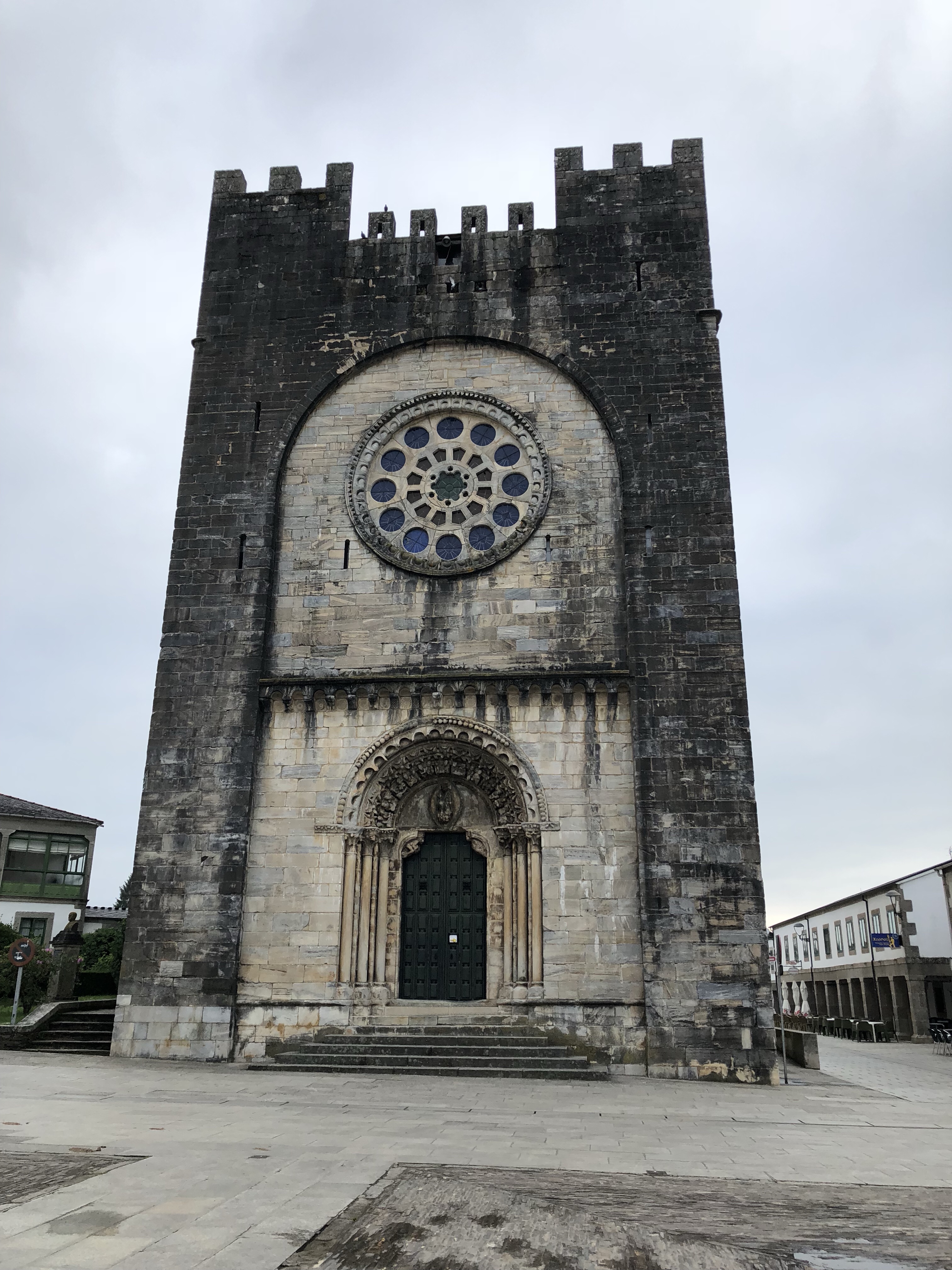 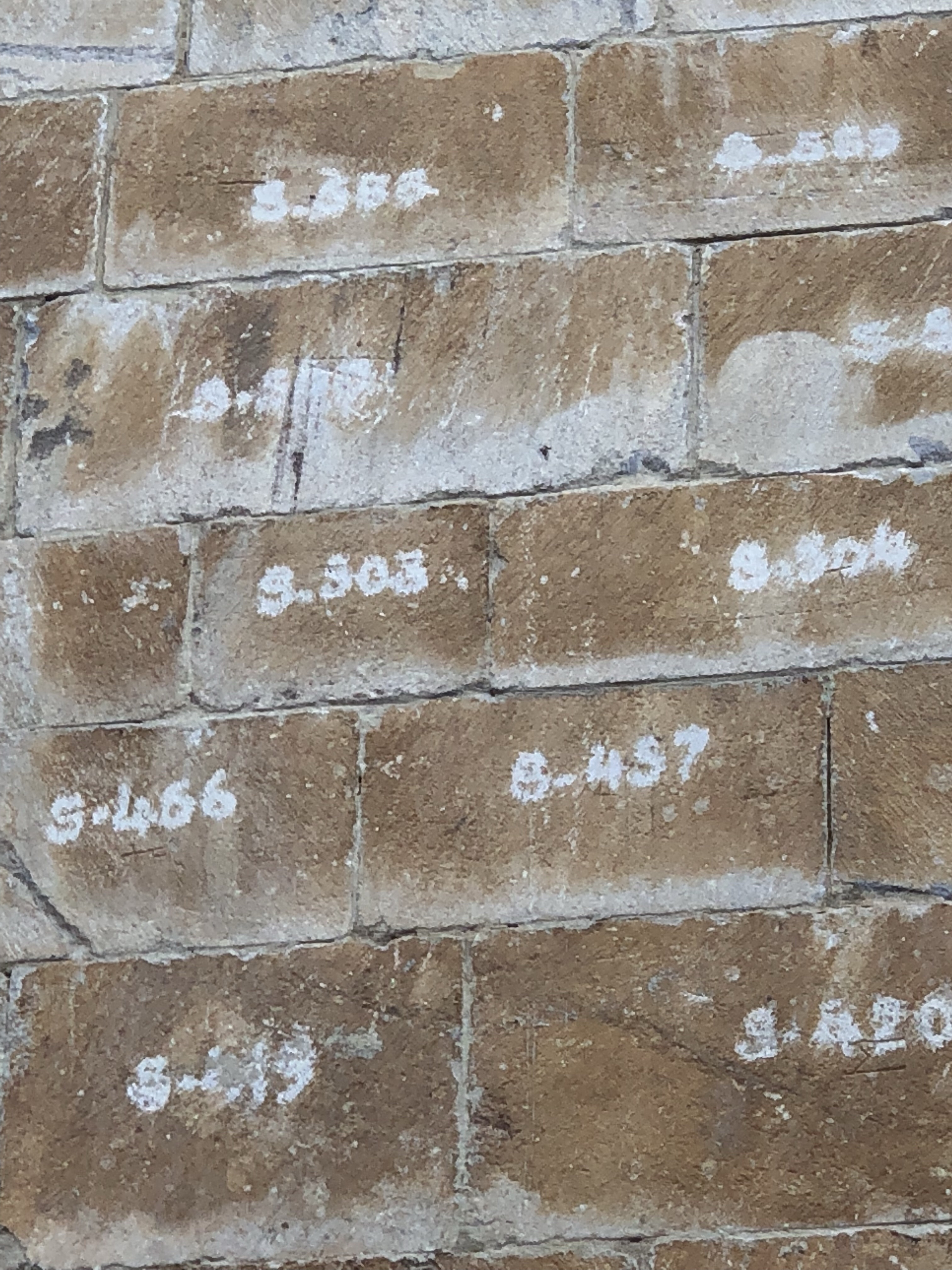 The church was worth saving, having been built in the 12th C by the Military Order of Santiago’s knights. Looks more like a fortress than a church.

At the beginning of today’s walk, before the rain, I was struggling with the crowds. Compared to the almost private trails I experienced before Sarria, there were people everywhere. And they were annoying me. I prayed for resilience and understanding. These people are all God’s children, and they have just as much right to walk the Camino as I do. 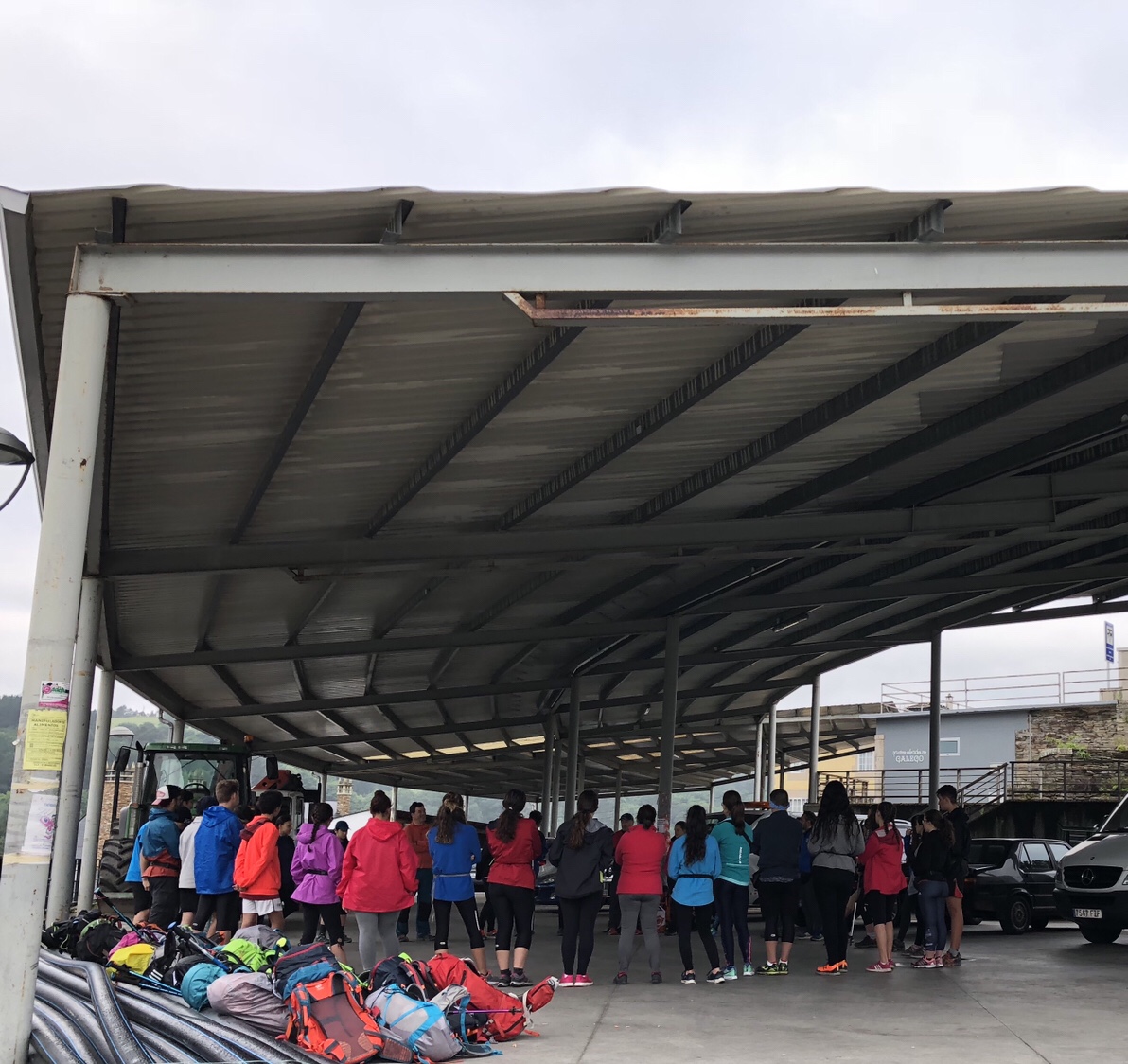 For a while this morning, I walked with an English woman, named Jackie. She had also walked from St. Jean. She said that during this walk, she had decided to leave England and move to France. England was just too negative, post-Brexit. She also said that when this is over, she’ll never walk again. She asked me if I would do the Camino again and I said, maybe, if I didn’t have to carry my backpack the whole way. She asked why I didn’t send my pack ahead, like so many other people.

That made me ask myself, why do I insist on carrying this load every day? I do it for Sam, as a tribute to him. In fact, it sometimes feels as if Sam himself is my burden, all 180 pounds of him. Other times, I feel that Sam is walking beside me, encouraging me forward with every step. That’s the way with mothers, our children are our greatest burdens and our greatest joys.

The best moment of the day happened when I was sitting in a cafe. The rain had just started and I had ducked in for something to drink and a place to suit up in rain gear. As I was relaxing on the covered terrace, with my boots off, in walked Miguel and Robert, two Spanish guys we met on our first night of the trek. I had seen them occasionally. But, once the trail got crowded, familiar faces became rare. So when they strolled in, we were all smiles.

When the rain began in earnest, the taxis were running double time, picking up fair weather pilgrims for the trip into Palas de Rei. I’d say that some of the late entrants were ill-equipped for long distances in the rain. This couple, with colorful ponchos, had plastic bags (shredded) on three out of four feet.

Surprise #2, my German friends Karsten and Chris are staying at my hotel.

I made plans to meet both sets of friends for dinner. As Camino schedules would have it, I ate by myself and then had a glass of wine with each couple. Sometimes, finding each other takes work. Even in small towns.

You’ve seen the pulpo ( which I ate again), now take a look at the grilled padrone peppers and potatoes with aioli. The best things I’ve eaten in a month! I had half portions, but still too much for me. I passed them out at the bar and made many friends. 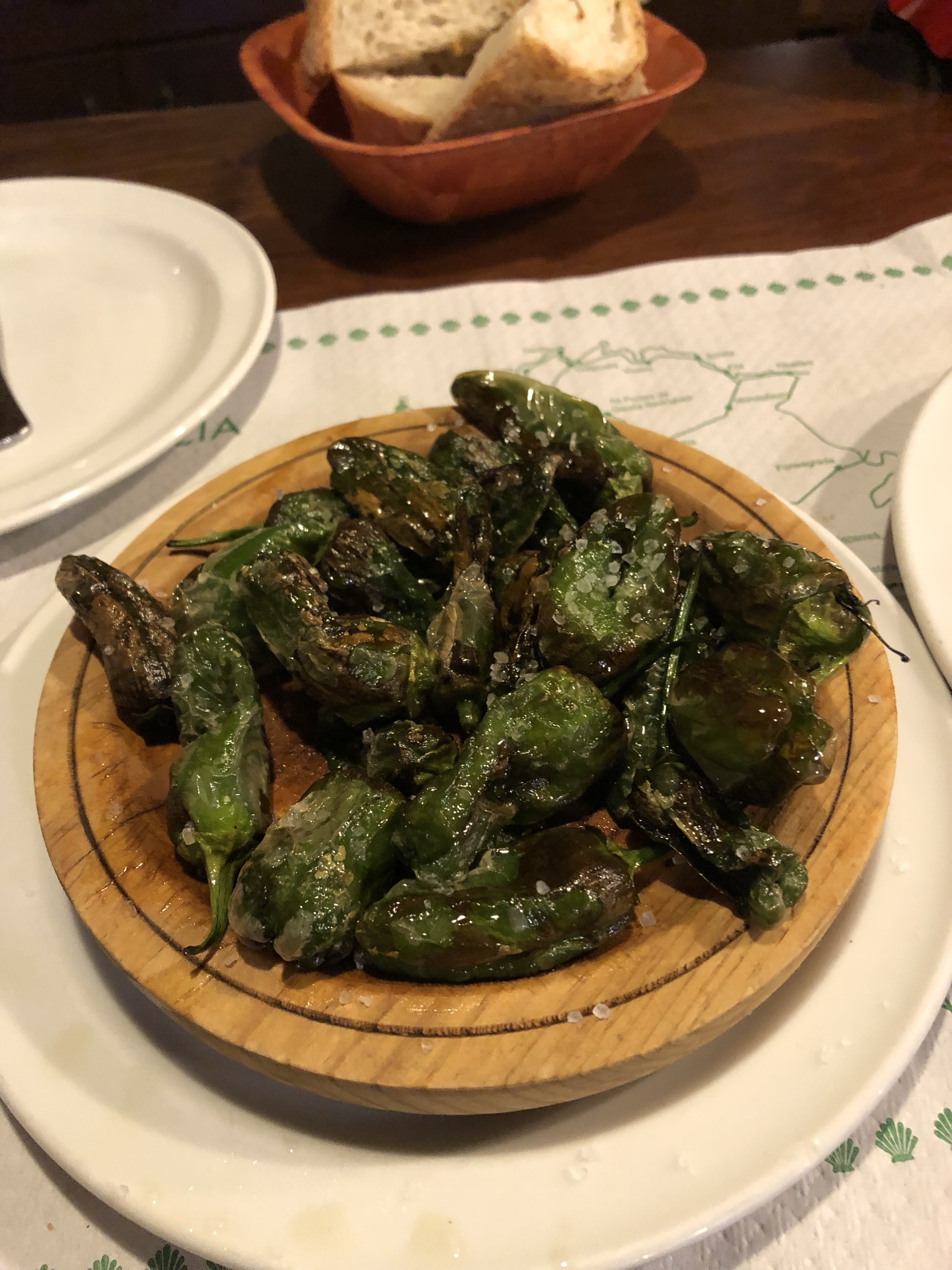 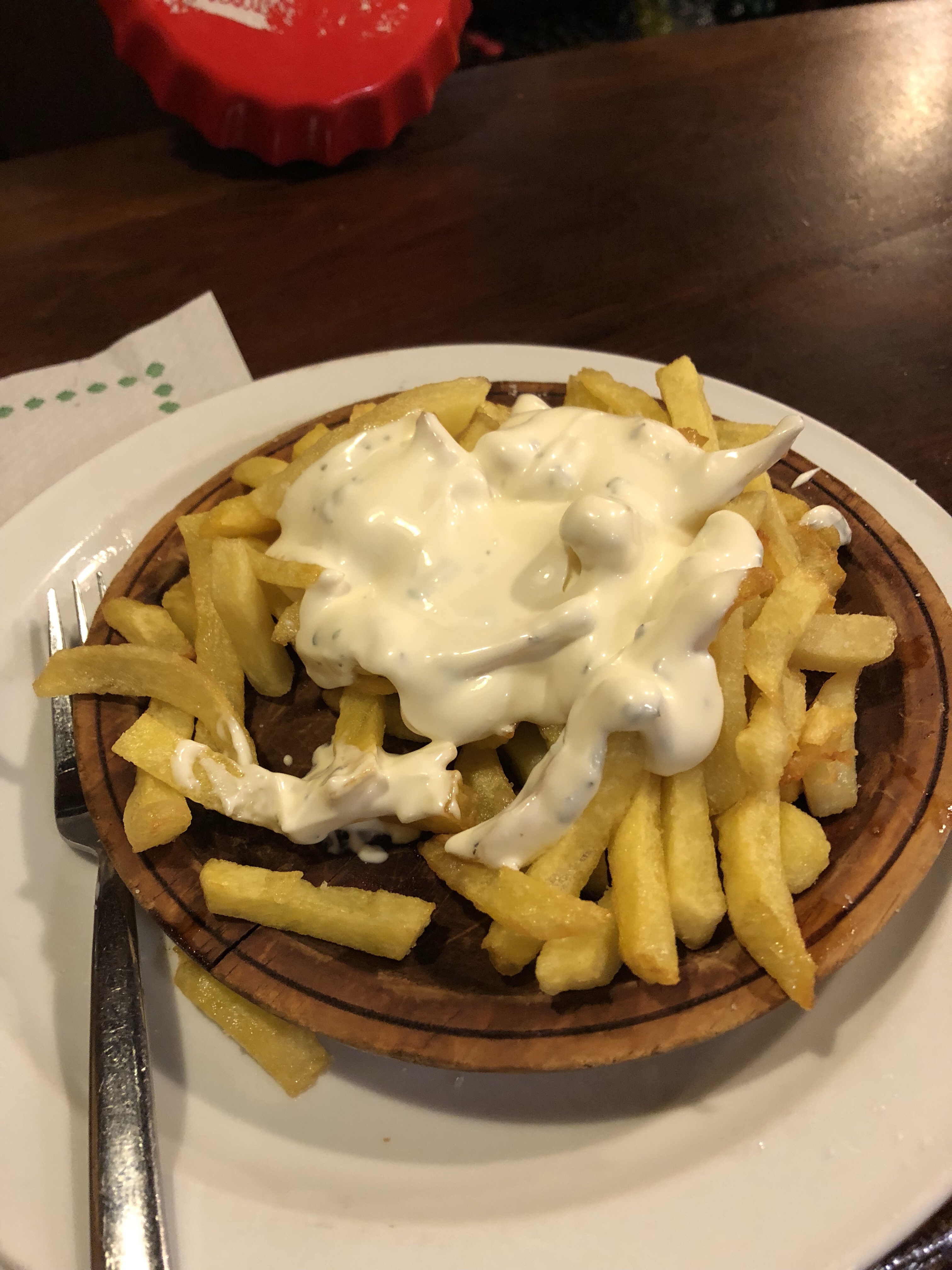